Hearthstone: Heroes Of Warcraft
Can I Run It?

Hearthstone: Heroes Of Warcraft
Have your say

Blizzard has found itself in hot water for suspending the winner of a Hearthstone Grandmasters tournament and pulled their prize money after the eSports professional voiced their support for the pro-democracy protests in Hong Kong.

Chung ‘Blitzchung’ Ng Wai is a professional Hearthstone player from Hong Kong who won the Asia-Pacific Grandmasters Hearthstone tournament. During the post-game interview, Blitzchung brandished a mask and said “Liberate Hong Kong. Revolution of our age!” Masks are currently banned by the Hong Kong authorities, who are trying to crack down on the widespread protests.

Blitzchung was suspended (along with the stream’s hosts) and his winnings have been withheld. He’s now banned from competing in Hearthstone tournaments for 12 months.

Blizzard has issued a statement on the situation saying “Upon further review we have found the action has violated the 2019 Hearthstone Grandmasters Official Competition Rules section 6.1.”

Section 6.1 imposes a rule which says, at Blizzard’s sole discretion, it may remove any player and reduce their prize money to $0 USD if they bring themselves into public disrepute, or offend a portion of the public. That’s a far-reaching rule which sounds as if it can be applied in just about any context. Handy. 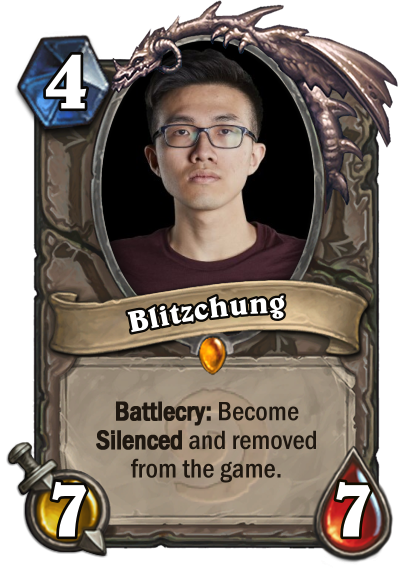 “Grandmasters is the highest tier of Hearthstone Esports and we take tournament rule violations very seriously,” writes Blizzard in its statement. “After an investigation, we are taking the necessary actions to prevent similar incidents from happening in the future.

All comments have been disabled by Blizzard on the news post, drawing a fairly stern line under the whole affair.

If feels as if Blizzard seriously needs some help in the PR department because they’re tripping up at every available opportunity these days. I mean, what is the best they seriously think can happen in this situation? If a short message advocating a pro-democracy movement has the capacity to offend then where is the line to be drawn? What we’re really seeing here is a publisher cowing to the Chinese and Hong Kong authorities for fear of retribution. It looks weak, if we’re being honest, and smacks of an insincerity from Blizzard in its approach to other hot-topic issues, picking and choosing the corporate activism which best suits its bottom line.

But, we’d love to know your thoughts on the issue. Were Blizzard in the right here? Or should such views be kept well away from a Hearthstone tournament? Let us know below!

Just Cause 4 is free on the Epic Games Store

Every game with confirmed Nvidia RTX ray-tracing and DLSS support